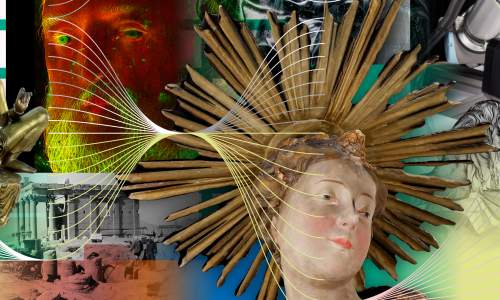 Produced as part of the ongoing research project titled Remaking Confucian Rites, the present Provincial Archery Competition reconstruction is based on the renewed philological study of the Yili (Book of Etiquette and Rites), a performance manual that describes rituals recorded by disciples of Confucius in the 5th century BCE.

The Confucian Body: Rite of Archery (2021), stills from reenactment video.

Ritual archery has a long and vital history in Chinese civilization. This chapter examines the current reenactment and digital reconstruction of the specific tradition of the Archery Rites embedded in the Confucian tradition, ritual practice and cosmology of li, which suffered major decline in the 20th century with modern China’s political upheaval and social shifts. In recent decades, scholars and practitioners in China have sought to revive the lost art of the Archery Rites. The most significant endeavor to date is the “Re-Making of Confucian Rites” (RCR), a major reenactment project based on the renewed philological study of the Yili « 儀禮» (Book of Etiquette and Rites), which describes rituals recorded by disciples of Confucius in 5th Century BCE.

The RCR project is forging the fundamental means to reconstruct and build new archives for the embodied knowledge systems of Confucian rites, through the coupling of reenactment with advanced digital documentation forms, in conjunction with novel interactive and immersive media art experiences for their affective transmission. The approaches arising from this work are building a foundation for the renewed scholarship and societal practice of the Archery Rites, as well as a cohesive framework to address the challenges facing the wider revival of intangible cultural heritage in China today.

What makes the RCR project both contemporary and significant is its radical contribution to the advancement of classical philology that represents a return to the origin. This has been made possible, firstly, by the creative advances in philological research since the seventeenth century, and, secondly, with the aid of twentieth century archaeological techniques. The remaking of the seventeen rites preserved in the Yili means a fresh re-grounding of China’s seminal civilizational “myth”, now made possible by drawing upon scholarship stretching over two millennia, presented in a medium that can speak to any person today.

In 2012, Professor Peng Lin, Tsinghua University Beijing embarked on the digital recording and reconstruction of the reenactments of the Rites. This initiative is a collaboration with Tsong-Zung Chang and the Jia Li Hall in Hong Kong, Professor Jeffrey Shaw at the Centre for Applied Computing and Interactive Media (ACIM), City University of Hong Kong, and Professor Sarah Kenderdine at the Laboratory of Experimental Museology (eM+), École Polytechnique Fédérale de Lausanne (EPFL) Switzerland. From Peng’s close reading, a movement-by-movement script for reenactment is being created for each Rite, with the aforementioned and reconstructed props, musical scores, and dialogue. Cross-referencing key primary sources, reconstruction processes include analysis of archaeological materials for building replica objects and costumes, through to the inclusion of live animals such as geese and horses during recordings.

The RCR team have so far filmed three complete Rites since 2013 in Hong Kong, Taiwan and China (the ‘capping’, ‘marriage’ and ‘archery’ ceremonies). These three Rites were shot at professional cinema quality, over several months of filming. A troupe of thirty elite actors from the Beijing Opera have thus far performed the ceremonies, alongside amateur players. The footage from this initial work is at the highest levels of cinematic aesthetic excellence. The results have been curated into major exhibitions worldwide, at the Royal Opening of the China Exchange London in 2015, Body of Confucius curated by Chang and Gao in 2016 for Beyond the Globe, the 8th Triennial U3 Ljubljana, Slovenia, and at the Art Institute Chicago exhibition Mirroring China's Past: Emperors and Their Bronzes (2018). It is the fifth ceremony, the Xiangshe li « 鄉射禮 » (Rites of the Provincial Archery Competition) that minutely describes for the first time the performance of the Archery Rite, and presented in Deep Fakes: Art and Its Double.